“For God so loved the world, that He gave His only begotten Son, that whoever believes in Him shall not perish, but have eternal life"....John 3:16
You see it in the end zones of football games, from the NFL to the CFL (Canadian Football League) to College and definitely Friday Night Lights at high schools across America. I have seen it at basketball games, music concerts and even secular downtown parades on hand-made signs anywhere. Everyone uses it across Western Civilization. They even quote it in King James English. While "Judge not less ye be judged" is used is a negative defense mechanism, John 3:16 is proclaimed worldwide as the main proof of our Loving God, even by those who don't believe in Him.

This is not criticism because John 3:16 can stand by itself, if the person proclaiming or hearing it spoken, understands even 10% of the full counsel of God as found in the Scriptures. But it is necessary, as in ALL of the Word of God, to grasp context, content and comprehension.

CONTEXT:
John 3:13-18 says: 13 No one has ascended into heaven, but He who descended from heaven: the Son of Man. 14 As Moses lifted up the serpent in the wilderness, even so must the Son of Man be lifted up; 15 so that whoever believes will in Him have eternal life.

16 “For God so loved the world, that He gave His only begotten Son, that whoever believes in Him shall not perish, but have eternal life. 17 For God did not send the Son into the world to judge the world, but that the world might be saved through Him. 18 He who believes in Him is not judged; he who does not believe has been judged already, because he has not believed in the name of the only begotten Son of God.

CONTENT:
- Before the Resurrection (which is when the hope of Eternal Life was realized), no one but God, could get to the Throne of Heaven except God Himself, with His Angelic beings. Old Testament saints who slept with their fathers, were in paradise, until Resurrection Sunday. Jesus is the Advocate and Intermediary, in that, He had to come down from off the Throne (as confirmed in Philippians 2:5-11) and if you read this passage from Philippians 2, we will know what all that really means. Without this amazing selfless act of love and grace, we would all be lost forever.

- The example of Moses "lifting up the serpent in the wilderness" was given to us by Christ so we could escape the sting of the second and final death. To go back to the Exodus, the Israelites were getting attacked, bitten and killed by snakes, as a direct warning from God. Moses prayed and God told him to make a bronze snake and put it up on a pole. Moses was then to tell the people who were attacked by the sting of the serpent to simply LOOK at the bronze pole and believe and be saved. Jesus is telling us that if we too look up to Him, His Sacrifice, death, burial and Resurrection - all signified by the Cross - we too shall live forever in the Kingdom of Heaven - and be saved!

COMPREHENSION:
We see the main content is the Cross (John 3:13-15). We see God coming down from Heaven to show the way there to anyone who believes. What we pick up from the verses now, after John 3:16 is the Rationale of the Almighty, found here in John 3:17-18. We really do need to catch this or those who don't, won't or could care less, would fall in the category Jesus warned about in John 3:18...and as the Bible says "it is a fearsome thing to fall into the Hands of the Living God". Only the unredeemed face this scenario 100% of the time. 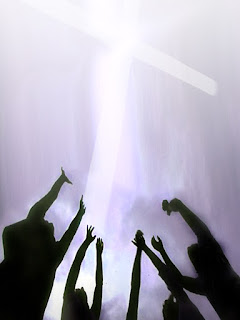 - God loved the world (John 3:16)....His general Grace, love and mercy is for all. Even those who reject and continue to reject Him. Still He loves. What people say and do to and about God daily condemns them daily, yet He lets us live. What a mighty loving God! His Grace is free. His Mercy is free. His Love is free.
- Because He loved, He gave. When God gives, He does not hold back. He gave the most precious only Begotten (which literally means "One of a Kind") Son, the Lord Jesus as part of His plan to redeem all mankind, from sin which destroys forever. He loves us even now, no matter how much we mess up all of that which He gives us to be stewards.
- The offer was/is and will always be there (with an expiration date) that if we confess with our mouth (Godly sorrow leadeth to repentance) and believe with our Hearts that Jesus IS LORD - we too can be part of this Great Plan of Redemption, conceived in Love. We WILL be saved!
- The "Whoever...or Whosoever" believes is the most crucial thing here. There are only two options: reject and perish via eternal separation from the God Whom the majority has and will reject or believe, have Faith and be welcome to the paradise prepared for ALL those who love God, and are called by His Name! It comes down to this.

THE CHOICE:
So what do we do with this knowledge of the most famous and popular verse in the known world? Is it just a happy "saying" for carefree events and then go about our business, with not a care in the world? What God is telling us this - we had better care! Just as people make plans for their older age, buy life insurance or save for retirement, it is very scary to see the majority of people all around us, who care not about the most important thing in the world - their eternal souls. While there is still time, there remains the free gift which avoids us harsh and final judgment where there is no cover for our sins. While there is still time, we can really grab John 3:16, pull it into our heart and run with it, until it becomes a part of us. The latter is the only way we can avoid being eternally separated from the Loving God, Who gave His One of a Kind Son - King Jesus.
(Graphic Credit- PINTEREST)
Posted by The Bernie Lutchman Blog at 7/13/2017