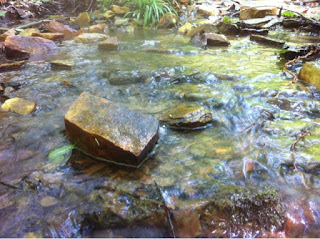 There is no way any creature on planet earth can survive without water.  Even creation without souls and wills need water to live, thrive and survive. Plants need it. Animals need it and mankind, who was made a little lower than the Angels definitely cannot live without water. Scientists say that the average human can go  days without food, not so with water. Dehydration or lack of water in the human body can lead to physical, emotional and mental problems according to doctors and scientists in both the private and public sectors. We see the effects of drought not just in third world countries, but increasing in an America which has not just abandoned a God but constantly shakes its collective fists at Him, refusing to humble ourselves and repent, turn from our wicked ways and be healed. Hence, spiritual dehydration can lead to a slow spiritually bankrupt life, which will result one day in eternal separation from the Creator.

There's nothing like a high mountain stream. Crisp, clean and clear, it pours out of the words of heaven. At first it slips down an incline and glides clean over smooth rock, picking up speed and cutting its own path this way and that. The Lord knows even where that little source of life goes. He directs thirsty people to it.

There's nothing like the taste of a high mountain stream. It has a natural sweetness and unique flavor which no bottled water manufacturer anywhere in this world could duplicate. It's the natural, original grace and goodness of God.

There's no such thing as eternal life without Living Water. This living water quenches the spiritual thirsty that has plagued humankind since the Fall in the Garden. This living water, once you and I drink it, does not require paying a monthly water bill or stopping in the local grocery store for a bottle of Dasani.  Sine every human being since Adam and Eve sinned, was born spiritually dead in our sins. It is only the pure Grace of God reaching down from Heaven, looking at the Sacrifice of God the Son (Jesus Christ) which pulls us out of the bottomless pit.

The majority of mankind would rather rebel like Moses and STRIKE the Rock rather than speak to Him and seek a right relationship with God, through Christ. (Scripture told us the rock which Moses struck, when he was specifically told to speak to it, WAS Christ  (1 Corinthians 10:4)). Jesus told us of the rich man who was in hell and he was in torment, yet he thirsted. Being conscious, he even sought a sip of water to cool his tongue. Why does this even have to happen when the cool, peaceful water of Life is completely FREE and available to everyone, everywhere (John 3:16)?!

Let's think about this next time up on the front range of the Rockies and the snow starts melting or hiking around Pine Mountain, Georgia...or the gorgeous Smokey mountains. Have you drank at the font of life? Why not?!
Posted by The Bernie Lutchman Blog at 7/31/2015