BRAND NEW FROM SUSAN ROHRER IN 2014 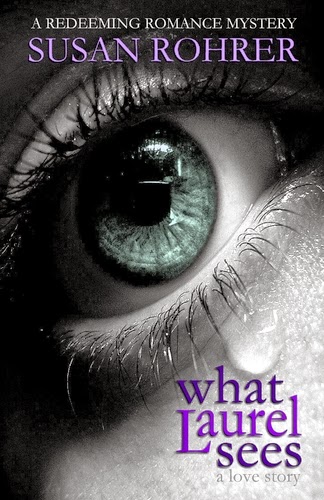 One reason Susan Rohrer is both my favorite bible study author AND
writer of dramatic fiction, is her ability to switch from rightly dividing the Word of Truth  in her previous work ("Secrets of the Dry Bones: Ezekiel 37:1-14") to what I think is her most accomplished work as a novelist! "What Laurel Sees" has just about every unexpected turn of events one can realize that involves a relatively small cast of characters in the book - which reads more like a screenplay. In fact, as an objective observer and reader, I would suggest that if Hallmark movies or Lifetime Channel were looking for their next dramatic made-for-TV classic, this would be it.

Among other things, the novel is basically a reflection of the sad shape we find the world in these days - a world where the rich, ambitious and powerful use all means necessary for their own personal gratification.  It is a world of political intrigue, adultery,  manipulation and the sad circumstances of what happens to a victim of religious abuse.  Add to this, the wronged ex-wife of a slain councilman - Frank Fischer, a woman who has the gift of prophetic vision from the Lord, and is therefore quickly discounted as a headcase by everyone else in her world.  Laurel Fischer is that ex-wife who lost her husband to the beautiful socialite Shana Fischer. Shana, the ambitious temptress and mistress of Frank Fischer worked the legal system, with him,  perfectly in their eyes and somehow managed to gain of Laurel's only child, Grace. The adulterous couple used Laurel's oft-spoken-of gift as a "seer" or "visionary" to  influence a judge to effect such a rare decision. This part of the narrative plays a strong role in the developing human drama, as Ms Rohrer's novel progresses.

The book gets on the off ramp of the freeway of mystery very early on. It picks up speed when the apparently unredeemed councilman is found slain. This sets off a chain of swift moving events. Events also swirl around a hard-nosed newsman. An unlikely romance springs up which sets this hardened self-described atheist reporter Joe Hardisty on the road to redemption, which could be a guidepost for many in the secular world of mainstream media! Somewhere in the first third of this novel, the well-crafted storyline grips you and never lets you pull off that freeway to the shoulder, until you are through reading it! This is what happened to me as I was unable to put it down on a three hour trip. As a person who almost never reads fiction, it takes a special gift of writing and credible authorship to get me to get even half way through such a book. "What Laurel Sees" is that kind of literary work and thus, it is highly recommended for your early summer reading! The dramatic conclusion of the book is worth the several hours of "page-turning"!

Having read all of Ms Rohrer's books, I venture to say that this is her most inspired, powerful, meaningful and capable of a transformative role in the life of the reader. It is written in such a way as to engage and appeal to both the new believer as well as the more mature Christian into an in-depth self examination. The Secrets of the Dry Bones will cause ANYONE who are serious about Will and Work of God in your life, to reevaluate and consider everything anew! I know it did me! I was so excited about having to look into the mirror of my own soul at some of the author's questions and promptings for study.The book, content, the Scriptural passages, the challenges met me at the current point in my life when all three of those things lined up perfectly to minister to me.I found the book written in a fast moving, easy to read and comprehend style which can hold a reader who is interesting in inspiration, encouragement, illumination and transformation. A special treat to the reader is the early format of looking at evidence and clues to this transformation from the purposes and promises of God (Ezekiel 37). The author executes that flawlessly....sort of like the CSI of biblical exposition! I recommend this book as tremendous resources for discipleship and growth, for any child of God.

WHO IS SUSAN ROHRER & WHAT INSPIRES HER: