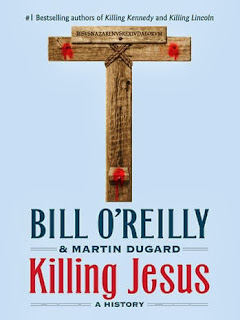 REVIEW BY AN O'REILLY SKEPTIC
Anytime a mainstream-type celebrity writes a book or makes a movie about Jesus Christ, the Bible or another biblical hero, the natural tendency of true believers is 100% skepticism. Those of  us who have been transformed from the realm of darkness and hell, into being sons and daughters of the Most High immediately get our backs up when we hear folks "diss" both Christianity, Creation and the Christ. We get our backs up when a member of the elite or the chattering class or even so-called Christians call us "dummies" or "ignoramuses" for not believing in random evolution and allegory as they do.
So it was with this frame of reference that I changed my mind and ended up purchasing Fox News Channel top-ranked TV personality Bill O'Reilly's new book- Killing Jesus! I had resisted purchasing O'Reilly's other "Killing" books or any other merchandise but this book tugged on my spirit.  Personally, I cannot forget O'Reilly's insults to those of us who believe the Bible is the 100% Literal, Holy Spirit -inspired Word of God. He does stand up for cultural Christianity - one of the few to do so in public life. So that is one in his plus column. But after a couple weeks of self-debate, I sensed what the official East Coast media about "there being no smoking gun" about who or what "killed Jesus" could not be right. Bill had his ace researcher Martin Dugard do extensive research in places most mainstream investigative journalists would never venture. Both O'Reilly and Dugard come from a traditional religious background left then open to wherever the research led...which was all the way from Judea to Rome. (They are both Roman Catholics).

What I soon discovered was that the most impressive part of this best-selling book, is a captivating narrative founded on historical truth, gifted wrapped to the world as an amazing "page-turner" of a package. To say "Killing Jesus" is very well written is an understatement. What will grab the reader, should he or she stay with the "reading plan" is a brief set-up on the person of Jesus Christ, why Herod was hunting him and the relational history of the crucial Roman Empire (crucial because it was the Romans who brought Christianity to the West after the 4th century).

The brutal (and often R-rated) history of the Roman Emperors from Julius Caesar to Tiberius is stunning to read as Dugard's research into two thousand-plus year old documents revealed. A substantial amount of  the first third of the book is dedicated to this particular period before the Birth of the Son of God on the earth.....thereby setting the stage and the atmosphere/environment into which Jesus was born. To this end, this book is NOT recommended for kids. There is too much about brutality and the weird sex lives of ancient historical figures.

The main advantage of this historical setting is the background  O'Reilly used to show the troublesome and oppressive corrupt state of Judea, into which this humble carpenter from Nazareth launched His brief, world-changing ministry. While he kept saying on his top-rated FNC show - "The O'Reilly Factor" - that this was a "history" and not a "religious" book, after reading it with a keen eye for Biblical accuracy, I have to affirm that I find no fault with that statement! In fact, I am now ecstatic that it is a quote "history" book because it portrays not just the character and life of Jesus, but the accurate events of His Miracles and teachings as the confirmed FACTS they are! The committed Christian, who is skeptical as I originally was about reading this, should take heart. Apart from the historical records of Rome and the Middle East (including what is left in Jerusalem) both Bill O'Reilly and Martin Dugard used the text of the NIV Study Bible as back up!

There were times in the early going of reading "Killing Jesus" where I got really frustrated with all the exhaustive Roman historical background. It was then the Lord spoke to me through His Spirit, Who lives within me. So when He said that "many will be reached with this book", I was immediately encouraged and set at ease! That was it! There was no smoke from heaven or lightning....just the Lord setting me straight. The book has sold over 500,000 hardcover books . But what I know the Lord will be happy about is the children's version which will take this thing over the million mark (similar to Killing Lincoln etc)! In the Spring of 2013, tens of millions of Americans and many more than that watched Mark Burnett and Roma Downey's version of the Bible, which did contain a few glaring errors. I did not read Killing Jesus with an eye to scrutinize every interpretation, but I do know enough of the Bible to recognize Biblical error when I see it.

ERRORS IN "KILLING JESUS"
He had Jesus at 36 years old when He died. Jesus was 33. There were several disturbing glaring omissions by the authors as to the Final Words of Jesus. They left out Jesus' quotes from the Cross "Father, forgive them, for they know not what they do". They left out the conversation about the thieves on the Cross. They left out Jesus telling His disciple John to take care of Mary (which is a Jewish custom).

O'Reilly had the wrong dates for the Prophet Isaiah's time (off by 100 years). He incorrectly had the Philistines defeating the Northern Kingdom of Israel in 722 BC when that could be easily cross checked with secular Jewish history (along with the Old Testament) that it was the Assyrians and not the Philistines.  There are some others which have to do with a misunderstanding of the Harmony of the Gospels. Any serious Bible student will not these.

The thing to note here is these men are not born-again bible believing Christians and never claim to be. Their claim is to be authors of a "history book". In his CBS 60 Minutes interview with Norah O'Donnell, Bill O'Reilly made it clear that KILLING JESUS does not make the claim that Jesus is Messiah. That is a personal declaration to which he is accountable. To those of us who read and even enjoyed this book, regardless of these errors - JESUS CHRIST IS THE MESSIAH - HE IS MY MESSIAH - HE WILL ALWAYS BE AND I WILL SCREAM IT FROM THE MOUNTAINTOP - JUST LIKE RIGHT HERE, period!

RECOMMENDED?
In these troubled times, this historical account of the Last Days of Jesus and the culture in which He lived,  will encourage any seeker of Truth, wavering Christian or even a mature believer, who ever doubted this historicity of both the Bible and its account of the Greatest Man Who ever lived! Share this book with a friend who is not a Christian or even an atheist. The history alone, therein, will interest just about any curious human being.

You know, it really does takes MORE faith to be an atheist than it does to believe the simple Truth of the Gospel of Christ. This book will both inform, interest and inspire anyone who approaches it with an open mind. There is only good that can come out of reading this with one eye on history and the other eye on His Story!