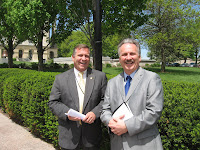 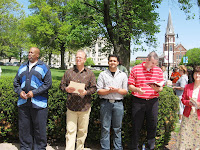 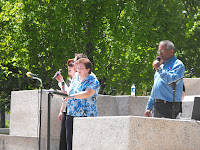 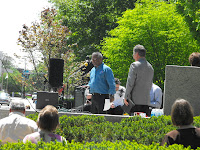 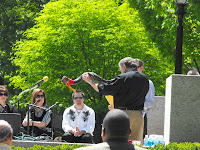 Waking up to a darkening cloudy sky on Thursday morning, May 7, 2009 was something to worry about....or was it?! I was in two minds - should I move the NDP prayer rally inside or leave it on the steps of the Illinois State Capitol in Springfield, Il.? Silently concerned but praying and asking God for clarification...I found myself knowing that I was trusting Him, yet the human in me was still looking in the sky!

Sure enough, the Lord used Howard Fouks and Lonnie Lein, the chief engineers of Christian Radio for Central Illinois WLUJ 89.7 FM, to finally answer me - Capitol steps and no questions. By 11am, the Son and the sun were so bright in an extremely clear sky that we could only marvel at the matchless Shekinah Glory of God! (The entire NDP Prayer rally was taped and broadcast on WLUJ 89.7FM and www.wluj.org to countless thousands at 3pm on May 7, 2009).

What a most powerful prayer rally. It was the largest crowd we have had in four years since I took over leadership of the movement, under the auspices of Business Men in Christ. Powerful worship music from Effingham's iPrayz set the tone and from the moment the Shofar (Jim Nesbit) went off, God took over His Prayer Rally. I will never forget Pastor Milton Bost and his powerful prayer for the family. This is more important than stimulus packages, political correctness and just about anything you can think about. It was an anointed time of intercession and worship.

The crowd ran about only 250 or so (count from programs and song sheets handed out) but more important was the quality of the Intercession from all prayer leaders. Prayer leaders were: Pastors Eric A. Hansen (iWorship Center); Milton Bost (Chatham Baptist Church); Ministers James A. Smylie and Gary S. Pierce; Karilyn Eastvold and Apostle James Nesbit.

The ground was claimed for Christ many years ago, and He showed up through His Remnant who worshipped and praised God there on this the 58th Annual National Day of Prayer!
Posted by The Bernie Lutchman Blog at 5/08/2009