Curtis Stanberry, an ordained minister and first class archaeology expert is an expert, both on digs and the Biblical foundation necessary to understand all the priceless finds in the Holy Land of Israel. He and his wife, Tamera, are a traveling team, grandparents and joyful souls who are one of the great hidden treasures of Central Illinois. The wealth of their knowledge of Biblical Archaeology; Dinosaur and other Great Flood fossils here in the western United States and the Scriptures is truly wonderful, especially in the field of Apologetics.

We had just a brief taste of this when Curtis delivered a 50 minute presentation to the Business Men in Christ Men’s ministry monthly breakfast in Springfield, Illinois. Curtis brought a great sample of his museum pieces to the breakfast and we even got to hold a piece of the Wall of Jericho, which Scripture recorded was brought down by Joshua and the Israelites!! (See some selected photos here).

Stanberry spent most of his presentation in a gripping archaeological and topographical explanation, from Joshua Chapters 7 and 8 of the great battle of Ai and location of the towns mentioned in Scripture. While this holds a great fascination for those who love history and even biblical archaeology, the significance of this should be shouted from the rooftop.

Never have we had so many bible resources, bible translations, bible versions, people giving away free bibles (Gideons, American Bible Society etc.) and Christian ministries proving Scripture true almost day. Never have we had so many bible apps, bible study computer software and free downloadable bibles WORLDWIDE than now.  The YouVersion Bible App, which began when a then-pastor from Decatur, Illinois wished he had a bible while waiting in an airport line, has recorded over 300 million free bible downloads worldwide in less than 11 years! Still, the majority of Christians and especially younger Christians, cannot give an account of their beliefs. Never mind knowing enough of the Bible to even tell another peer about Jesus, His Word and His Creation. 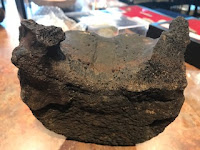 More and more young people and even some young adults do not believe in almost 60% of the Bible which tells the provable Creation story. More and more archaeological evidence proves it. This is harmful to their souls and eternal destinations with more than 50% of young “evangelicals” believing there is more than one way to Heaven than the Jesus Who said, in John 14:6 “I am the Way, the Truth and the Life”. All of these increasingly  terrible facts about the state of Christianity in America and other countries (where it is worse) cry out with the need for Apologetics.

Here is where Biblical Archaeology comes in. Christianity is the only Faith system and “religion” if you will, where the evidence supporting its main document – the Bible – grows by the day! From the soft tissue found in the dinosaur fossils from Montana in 2005, confirming the Young Earth,(more here) to the layers of silt in the Grand Canyon, to the beach sand I saw in gorges in the Illinois Starved Rock State park and the legions that the original people of the area had, the evidence of God and the wonders of His creation is everywhere.  We just need to look out the door in the morning. This knowledge is being kept from all young people these days, except Christian homeschoolers, by an pagan system of education and evolution which will condemn many to eternal separation from God on Judgement Day. 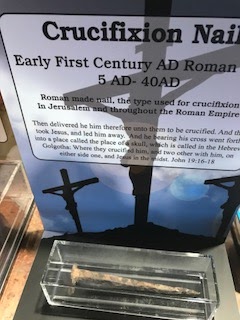 The best response is Apologetics.  This is the mission of David Rives Ministries; Ken Ham and Answers in Genesis and many other Creation ministries. The popular “Is Genesis History” had tremendous impact when it was shown in 2016, which was produced by The Truth Project.

Curtis and Tamera Stanberry are doing their part wonderfully. They are available for presentations from an hour to 1, 2 or 3 day conferences, with their amazing traveling Bible Museum pieces. Here is their contact information. We highly recommend them to your church, youth ministry or association for a conference of any length. It will strengthen the faith of most around us.