PRAYERS OF THE BIBLE SERIES - THE BOOK OF JAMES, #1 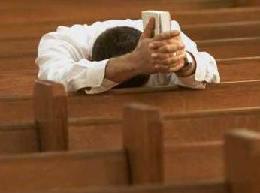 James is the half- brother of the Lord Jesus Christ. He was born of the marriage of Joseph and Mary after the Lord Himself was born of a virgin. Jude is the other well known half-brother of Jesus (as in the Book of Jude). The Savior also had another half brother and three sisters. None of the Messiah's half-sisters are mentioned by name. The Word of God (the Bible) tells us that none of these brothers and sisters believed in Him. So God made a point to say in 1 Corinthians 15:7 to point out that after the Resurrected Christ appeared to 500 people at one time, He appeared to JAMES! This confirmed the Lordship of Jesus to His half-brother. Here is the relevant passage, written by the Apostle Paul: "After that He appeared to more than five hundred brethren at one time, most of whom remain until now, but some have fallen asleep;then He appeared to James, then to all the apostles." (1 Corinthians 15:6-7)

James became such a prayer warrior that he spent a vast majority of time on his knees praying to God. His prayer life overflows in his writing in the Book of James which reads, in total, like an extension (and exposition) of Jesus' Sermon the Mount! When James died and they were about to place him in his coffin, it is recorded that his knees were so calloused and covered with rough skin, that it "resembled a Camel's knees".
(Read my post on "OLD CAMEL KNEES HERE).
His focus on prayer are not actual prayers themselves, but INSTRUCTION about how to pray and to Whom we should go. When James speaks, he is "E.F. Hutton" - we listen, as it is direct from God. In presenting this instruction, the goal is to point to other prayers in the Bible or unpack the instruction themselves (as in Chapter 5), in order to derive the knowledge and benefit which God wishes us to have.

James 1:5-6 says "If any of you lacks wisdom, let him ask of God, who gives to all liberally and without reproach, and it will be given to him. But let him ask in faith, with no doubting, for he who doubts is like a wave of the sea driven and tossed by the wind".

The instruction here is Wisdom (which begins with the Fear of the Lord), ONLY comes from God. The great and wonderful thing is- we can ask it is given to the point of overflowing! There is a caveat to asking God for wisdom. If we ask in doubt, we remain without. If we ask with the full measure of Faith, it would be great.

To this end, let us look at King Solomon's prayer at the Dedication of the Greatest Temple in History, almost 2900 years ago and how he prayed. This is Solomon at his best, when he followed the Holy One of Israel and Him alone before easy living corrupted him.  God had offered Solomon ANYTHING he wanted, as He favored David's son. All Solomon had to do was ask. Solomon could have asked for money and fame and fortune. Instead, he asked for "BIYN" (Hebrew for a discerning heart - true Wisdom).

The encouragement here is for us to study how Solomon prayed and then follow the Word of God and do likewise. Praying for Wisdom in any circumstance is something God never refuses those of us who belong to Christians - born again believers.  Read the following passage and meditate on it from 1 Kings 3:5-12a:
5 At Gibeon the Lord appeared to Solomon in a dream by night; and God said, “Ask! What shall I give you?”

6 And Solomon said: “You have shown great mercy to Your servant David my father, because he walked before You in truth, in righteousness, and in uprightness of heart with You; You have continued this great kindness for him, and You have given him a son to sit on his throne, as it is this day. 7 Now, O Lord my God, You have made Your servant king instead of my father David, but I am a little child; I do not know how to go out or come in. 8 And Your servant is in the midst of Your people whom You have chosen, a great people, too numerous to be numbered or counted. 9 Therefore give to Your servant an understanding heart to judge Your people, that I may discern between good and evil. For who is able to judge this great people of Yours?”

WORDS OF SOLOMON TO KEY IN ON (T.A.N.)
THANKSGIVING:You have shown great mercy (VERSE 6A)
ACKNOWLEDGEMENT OF OUR OWN HELPLESSNESS: And Your servant is in the midst of Your people whom You have chosen, a great people, too numerous to be numbered or counted. (VERSE 8)
NEED: Therefore give to Your servant an understanding heart to judge Your people, that I may discern between good and evil. (VERSE 9)