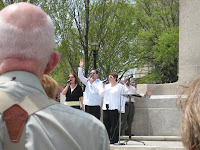 TO SEE MORE PHOTOS OF THIS EVENT:GO TO WWW.BUSINESSMENINCHRIST.COM AND CLICK ON PHOTO GALLERY TO SEE NATIONAL DAY OF PRAYER PHOTOS FROM SPRINGFIELD, ILLINOIS.

Thursday May 1, 2008 was the 57th Annual National Day of Prayer Celebration in these Great United States of America! While there were thousands of NDP events nationwide, saw an official 61% (YES SIXTY ONE PERCENT!!) increase, I can vouch with certainty that Illinois had the Power of the Holy Ghost and Fire rain/reign down from above!
There was something absolutely special in the days and weeks running up to this Annual Noon Rally at the State Capitol steps in Springfield. Last October at our NDP Prayer Retreat and Annual Conference in Colorado Springs, Pastor Stan Pratt and his wife Delbra (the new Illinois State Coordinators) and myself signed on to a month-long Prayer Nightwatch of a new 40 week long Nationwide Repentance Movement. It changed my life.
The Lord hath woven a thread from December, when I taught on Fasting at Berlin Christian Church. Beginning in January to the end of April and culminating on May 1 National Day of Prayer Rally at the Lincoln statue, He took me on the wildest journey of FaithBuilding I have ever been on. Everything from praying for Repentance at a Springfield-wide Solemn Assembly to speaking to a ministerial alliance in another county etc etc...He built my TOTAL and ABSOLUTE dependance on HIM and HIM alone to the point that it was so easy to just let Jesus be Jesus and have His way!
I can go on and on about the Winter/Spring 2008 Walk of Wonder, but it could be in my next book!!ha!
Suffice it to say, what occured on the steps of the Illinois state capitol was all about God. The tremendous worship group from Effingham - iPrayz (www.iprayz.com) set the tone with their pre-rally concert. Before that our huge prayer circle of pastors, musicians and Christian Radio men (www.wluj.org) surrendered the entire proceedings to the Holy Spirit of God!
After the Rally started promptly at Noon with the Honorable Tim Davlin, Mayor of Springfield reading the NDP 2008 Proclamation, our NDP airplane from PRAYERFLIGHT (www.prayerflight.org) flew overhead and made the sign of the Cross with its afterburn! We had prayer warriors up there praying for us below!! We were covered, I tell ya! AMEN!
It was a joy to host the busy Mayor who stayed for most of the Rally. Donna Turpin of Lake Williamson Christian Center prayed our Prayer of Repentance and we were off into Holy Ghost Fire from Above! Hallelujah!
Our Prayer Leaders were Pastors Stan Summers (Koke Mill Christian Church) - ALL forms of Government; Tim Kruzan (Jacksonville, Il First Assembly of God) - ALL FAMILIES, EDUCATION AND MEDIA THEMES; Wes McNeese (New Mission Church of God) - RECONCILIATION. This last one is significant in Springfield. 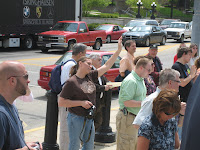 This year, 2008, is 100 years since the most awful Springfield race riots in America. The Mayor Davlin and the Springfield Ministerial Alliance (www.springfieldministerialalliance.org) has declared 2008 as the year of Reconciliation. There was some trepidation at first as to what this would mean. But with the leading of the Springfield International House of Prayer and my own fired up brother James Nesbit (www.preparethewaymin.com), eight (8) Solemn Assemblies were declared leading up to August 2008 when a huge ceremony will be held. By having the Lord take over from the beginning through repentance, forgiveness and REAL prayer, real movement is now happening in this area. I am happy to declare that it has affected me significantly to how I do outreach and minister to others in love! PTL!
One of our prayer leaders was unable to make it, but the official 2008 NDP Prayer Leader, Pastor Stan Pratt of Way of Life Church in Taylorville, Illinois, picked up the slack by praying for all our Churches, Missionaries and Ministries. Rev. Gary McCants, the presiding Elder of the Regional AME Churches prayed for our Military, Law Enforcement and Business. All Seven centers of influence, and more, were covered in our prayer.
My lovely and gracious wife, Vicki Lutchman and I led the final worship song, WONDERFUL MERCIFUL SAVIOR, made popular by Steve Camp and SELAH. Vicki has been most loving and understanding of all my long sacrificial travels, and hours away from home or working on my books or events on the computer. The Lord never makes a mistake and He surely blessed me with the perfect wife for me! AMEN! 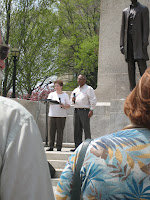 Special thanks to my dear buddy Eric Hagen and his lovely wife Jenni from iPrayz! They have an awesome presence for the Lord which showed!!! From my crowd counting skills as a former church deacon, I would estimate over 200 present...and many more in flux as they walked by. Also because this is right on the street, hundreds of cars, trucks, bikes were stuck in traffic right in front of the rally all during the Noon hour!!
We got some honks of approval!
There was one protestor! One! AND she did not have the courage of her lovely convictions to come unto the Hallowed ground of the Rally to yell at us. So, just like her lily-livered boss, satan, she screamed from across the street...only to be heard by a few at the end of the sometimes 5 deep crowds on the sidewalks.
There is another reason she stayed across the street!! I had prayer walked that spot since August 2007 for May 2008!! Each time I passed it on my walks during lunch, I claimed it for Jesus. My dear brother and intercessory brother Earl Powell, prayer walks the entire Capitol complex each Monday. That ground belongs to Jesus AND NOBODY, NOBODY, NOT SATAN, NOT HIS WICCAN DEMONS, NOBODY, is allowed on it, who is against Him! Period! 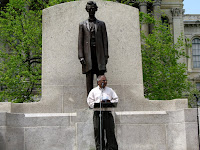 Thank you also to WLUJ 89.7FM, Christian Radio for Central Illinois for not only providing the sound system but for then broadcasting the event at 3pm (streamed on www.wluj.org)and for running our radio ads, for free - year after year! PRAISE GOD FOR THEM! He has and WILL continue to bless them and their ministry ALL the time! Also thank you to Business Men in Christ for financing and supporting this ministry completely! AMEN! I am grateful to everyone of our core leadership - Dave Rosche, Doug Ryherd and RPM/BMIC President Tom Cheshire.
Most of all, I thank Almighty God. I am in awe that He would take a man who looks and talks like me and put me in a position of servant leadership like this! He brought me out of my own Egypt to boldly lead with my chin, for such a time as this (Esther 4:14). I stand with my hero - the Apostle Paul - I want to die daily, empty myself daily and live in the chains of Christ because to lose myself, is to find happiness. I don't mean happiness in the worldly sense. I mean the true happiness that comes from a life totally surrendered to His Will.
In Jesus Name
Amen
"
Posted by The Bernie Lutchman Blog at 5/04/2008