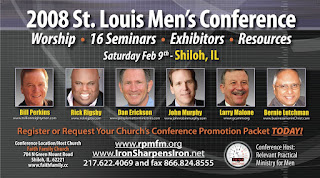 Iron Sharpens Iron - ISI - (www.ironsharpensiron.net) began as a local Men's Discipleship Ministry in Hartford, Ct. by Brian Doyle. Brian was once the New England Regional Manager of Promise Keepers! In 2007, he rolled out ISI nationally. Business Men in Christ (www.businessmeninChrist.com) led by our president Thomas Cheshire brought ISI into Springfield for a March 2007 one day conference.
This was all unknown territory for us! Tom was spearheading the entire operation which was comprised of several teams of dozens of volunteers! My assignment was/is to head up the Prayer Committee. This committee has two prayer teams. One team prays in a hidden private room all day long for the conference and the other was open for private ministry to attendees.
Former Moody Bible President Joe Stowell headlined the speakers with Bishop Larry Jackson as the other main speaker. Both men were powerful! Weeks before the conference, we only had 46 men registered! But the Lord smiled on us! The pastor of the palatial First United Methodist Church in Springfield, which we rented, said we had 1000 men!! However we could only account for about 600!
This year, Tom has gone full time into ministry with his Relevant Practical Ministry For Men (www.rpmfm.org) which will be doing full time conference ministry as well as discipling opportunities for men. RPM is under the umbrella of Business Men In Christ.
Next year (2008) will be a big year for ISI in this area!! Tom and some faithful men of God and Christ in the metro St. Louis area are bringing ISI to the Illinois side of the big river. This will be on Saturday February 9 and we invite all men in the Belleville, Freeburg, Collinsville and every town west of the Mississippi in Missouri, to register for this conference.
Bill Perkins and Rick Rigsby are the keynote speakers at both the Feb 9 conference in Shiloh, Il (at the Faith Family Church) and the March 1 2008 conference in Springfield, Il. at the same FUMC campus.
I was graciously asked by Tom to do a breakout session at ISI in 2008 and am humbled and thankful for this incredible opportunity! I am still in awe that God would use someone like me to do His Work! A Seminar Series called "FACE UP!".....(Face up to...Depression....Sin....A lackluster prayer life etc...) has been created and I will be ready to go by next Spring!! AMEN! PRAISE THE LORD AND THANK YOU JESUS....and Tom and ISI!!
Stay tuned to this blog and to both the BMIC and RPM websites for more info on Iron Sharpens Iron 2008, which is going to be bigger than ever. It is the only National Grassroots Men's Ministry which has grown by leaps and bounds, the right way - by letting God lead and fight our battles.
Posted by The Bernie Lutchman Blog at 11/26/2007